"Contemporary art is implicitly in line with the company’s values and vocation to "build excellence, in a sustainable and innovative way, [...] to anticipate the future, to be visionary and creative" "

The fiftieth anniversary of the death of Giuseppe Capogrossi (Rome, March 7, 1900 - October 9, 1972) is an important occasion to celebrate one of the fathers of informal painting and Italian art of the twentieth century. On September 20th the exhibition will inaugurate at the Galleria Nazionale d'Arte Moderna e Contemporanea. Capogrossi. Dietro le quinte by Francesca Romana Morelli, realized in collaboration with the Fondazione Archivio Capogrossi and the support of Ghella and UniCredit.

The exhibition at the Galleria Nazionale brings the artist’s work back to Rome after more than 20 years, initiating the initiatives in tribute to the artist for this anniversary in the context of an articulated project by the title Capogrossi. Il segno nei musei e nelle istituzioni italiane, at the instigation of the President of the Guglielmo Capogrossi Foundation.

At the 1954 Venice Biennale Capogrossi is present with a memorable personal room: Giulio Carlo Argan, convinced that art is an "act of conscience", after visiting the exhibition writes privately to the artist "Among the painters of today you are one of the few who cares much more about the shape than the picture; and they realize that, to save the first, it may be necessary and still reckons to sacrifice the second (...) Therefore I think that your position,  even if someone can judge it stubbornly secluded and abstractly contemplative , both generous and human.(...) It is always a pleasure to find in the painting of a friend his most authentic moral qualities; and of this, no other."

In the exhibition, a selection of over thirty paintings and twenty works on paper from the collections of the National Gallery, home to the most significant works by the artist, the Fondazione Archivio Capogrossi and private collections. The exhibition also includes archival documents from the artist’s documentary collections kept in the Gallery Archive and at the Foundation, such as photographic portraits of Capogrossi with prominent personalities of the time, exhibition catalogues, magazines, letters and newspaper articles, which reconstruct the relationships woven by the artist. As the curator Francesca Romana Morelli points out "the exhibition is an excursus that intends to establish a close dialogue between the first season of the artist’s painting, culminating in the tonal period, with the next phase, in which the works work like the tiles of a puzzle, which once stuck together, without following a chronological order, but rather assonances in the compositional structure, make visible the authentic physiognomy of the artist, who since the thirties filters his painting with a logic and a mental rigor, always listening to himself and constantly observing the outside world, remaining out of established routes".

Among the works on display, a selection of paintings not exhibited for a long time such as the iconic Superficie 274 (1954) and Self-Portrait with Emanuele Cavalli (about 1927), in which the artist doubles himself through the portrait of Emanuele Cavalli, who emerges from behind his shoulders. The Winter Landscape (1935), taken from the terrace on top of a building in Prati, where Capogrossi had his studio, but also intended as a pure and desolate staging of human life (owned by UniCredit).

“I am pleased that Ghella is supporting this exhibition of the Fondazione Archivio Capogrossi, because, with its specialization in underground excavations and futuristic infrastructure works, we believe that the company has substantial commonalities with Capogrossi, an artist with bold choices, which have naturally positioned himself among the international avant-garde. Even Ghella’s corporate policy, which focuses on an understatement attitude in communication and focuses rather on shared social values, is somewhat similar to Capogrossi’s Saturnian character, who has always talked about himself reluctantly, preferring rather a secluded condition, from where to observe the world at a due distance and cultivate an introspective dimension from which to generate clarity and strength to express something that is within him.

The artist deliberately concealed himself and his thought behind conceptual images, so much so that to explain his poetics, he resorted to an episode that happened when he was a child. Whilst visiting with his mother an institute for the blind, he was intrigued by two blind children who were drawing. When he approached them, he discovered that their sheets were full of small black marks, a sort of mysterious and vibrant alphabet, which provoked a strong emotion.

In that precise moment Capogrossi understands that the signs do not have to be the image of something seen, but they can leave something that is inside of us to surface: «My ambition is to help people to see what their eyes do not perceive: the perspective of the space in which their opinions and actions are born».

The same vision we find in Ghella, the ability to combine innovation and passion, the strength to "see beyond."”

Francesca Romana Morelli | Curator of Capogrossi. Behind the Scenes

In addition, an extraordinary Superficie 76 bis (1954-1958) whose signs are arranged in an articulated way, creating empty spaces that have a certain weight in the compositional structure; the essential and enigmatic Superficie 538 (1961), characterized by a black plane that incardinates in relationships and forces in place in space, enhanced by the properties of color and by subtle degrees of brightness and opacity of black pigments, interrupted diagonally by a white slit, on which the combination of black and larger orange marks exerts a dynamic force.

Finally, an imposing vertical marouflage, Superficie 419 (circa 1950), whose two-dimensional character is accentuated by a grid on which stand the large signs, which impose an order on the smallest signs, and Superficie 106 (1954) oval-shaped work, understood by the artist as a continuous form, which contains inside a compositional structure in search of a connection with the visual-sonic dimension of the external space. These last two works belonged to the famous architects Luigi Moretti and Vincenzo and Edoardo Monaco, who played a decisive role in the artistic and human history of Capogrossi. The exhibition is enriched by a room of oval-shaped works and a room of white reliefs, designed by the artist in the sixties, which demonstrate his inexhaustible desire for experimentation. Last but not least, the large tapestry Astratto (1963), designed for the Turbonave Michelangelo.

The exhibition at the Galleria Nazionale opens a program of events on the anniversary of Capogrossi’s death, which will continue from October with an exhibition spread throughout Italy, a section curated by Patrizia Rosazza Ferraris: about 35 Italian museums and institutions that keep in the collections works of Capogrossi and adhere to the initiative. Each institution will participate by highlighting its works through meetings, conferences, workshops. 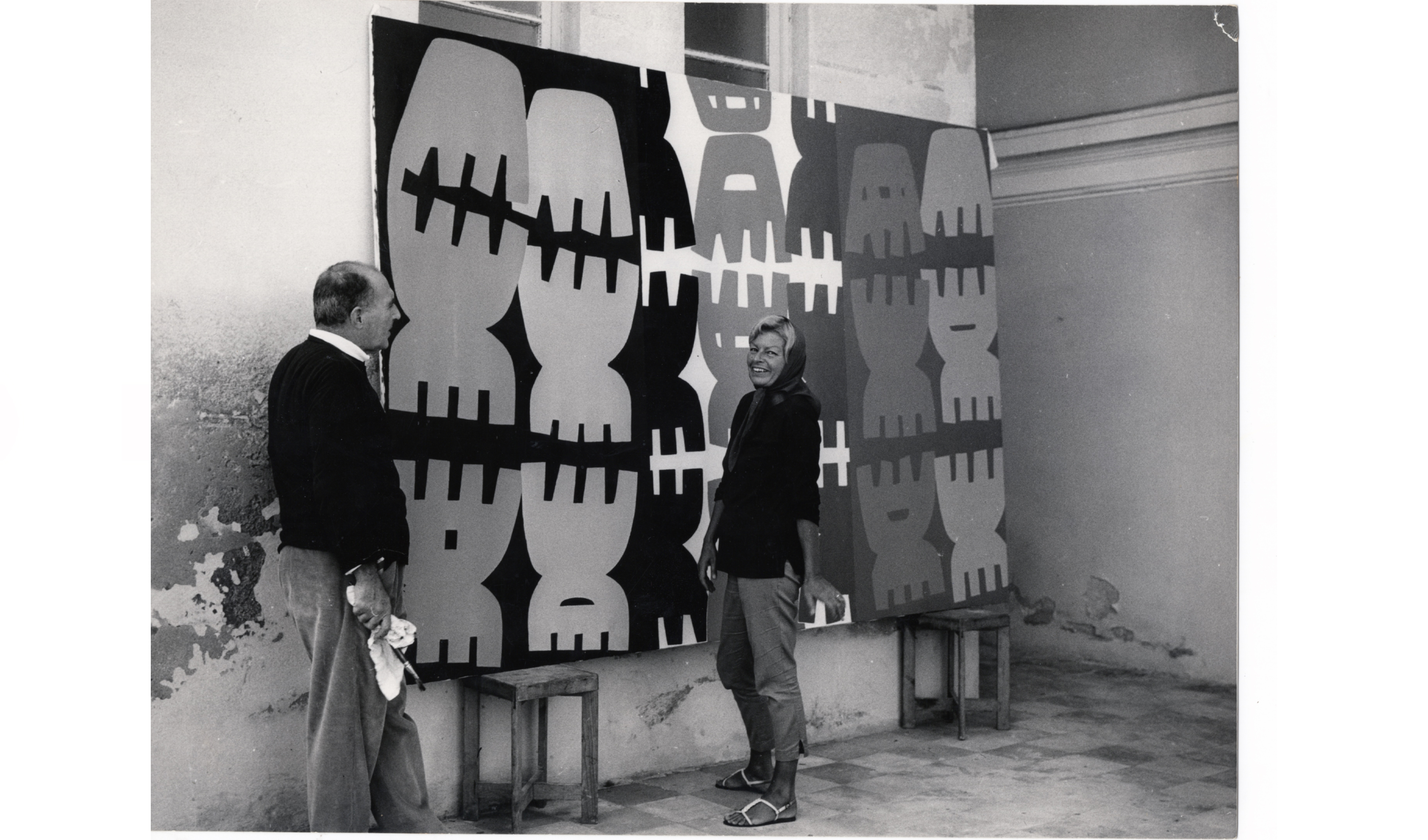 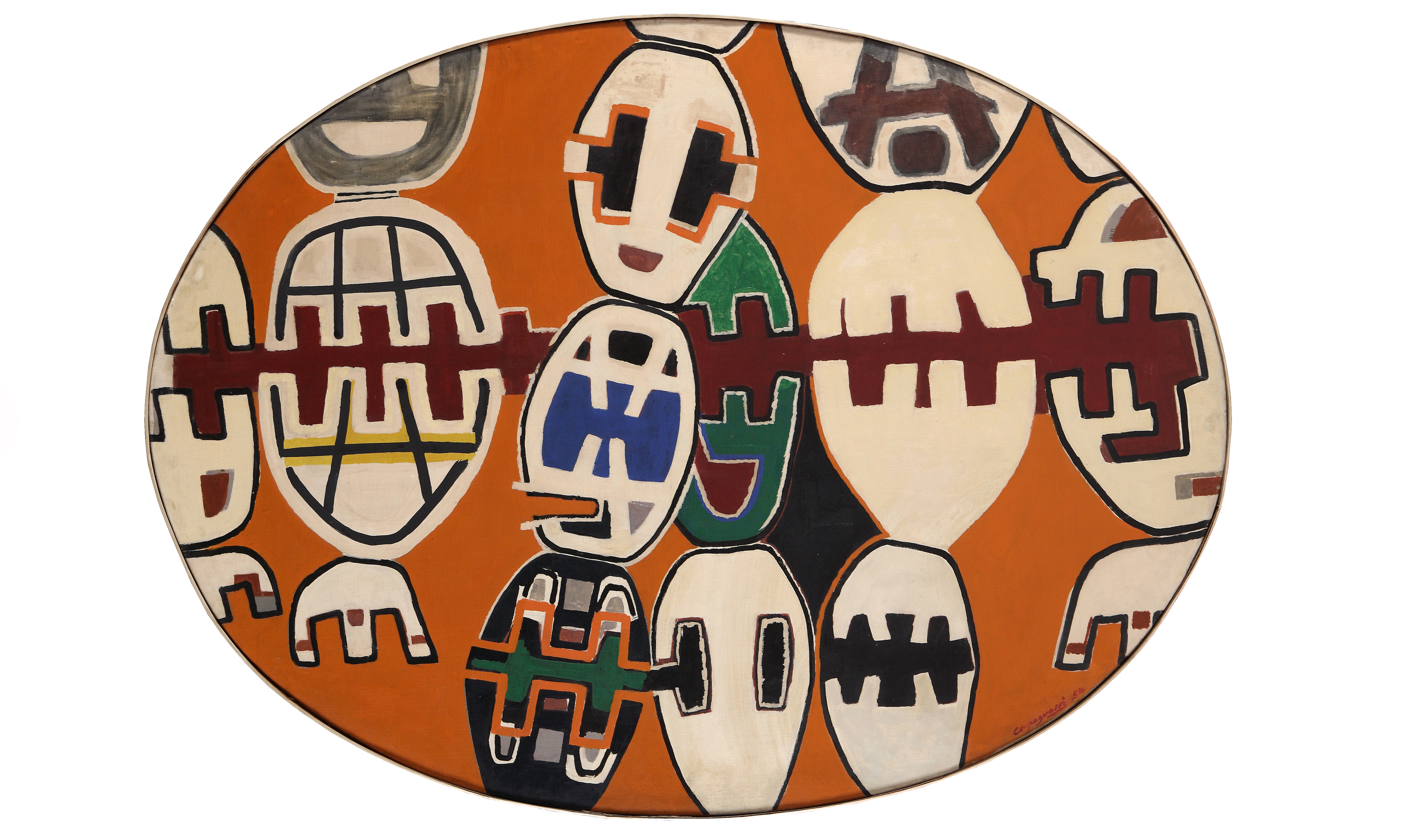 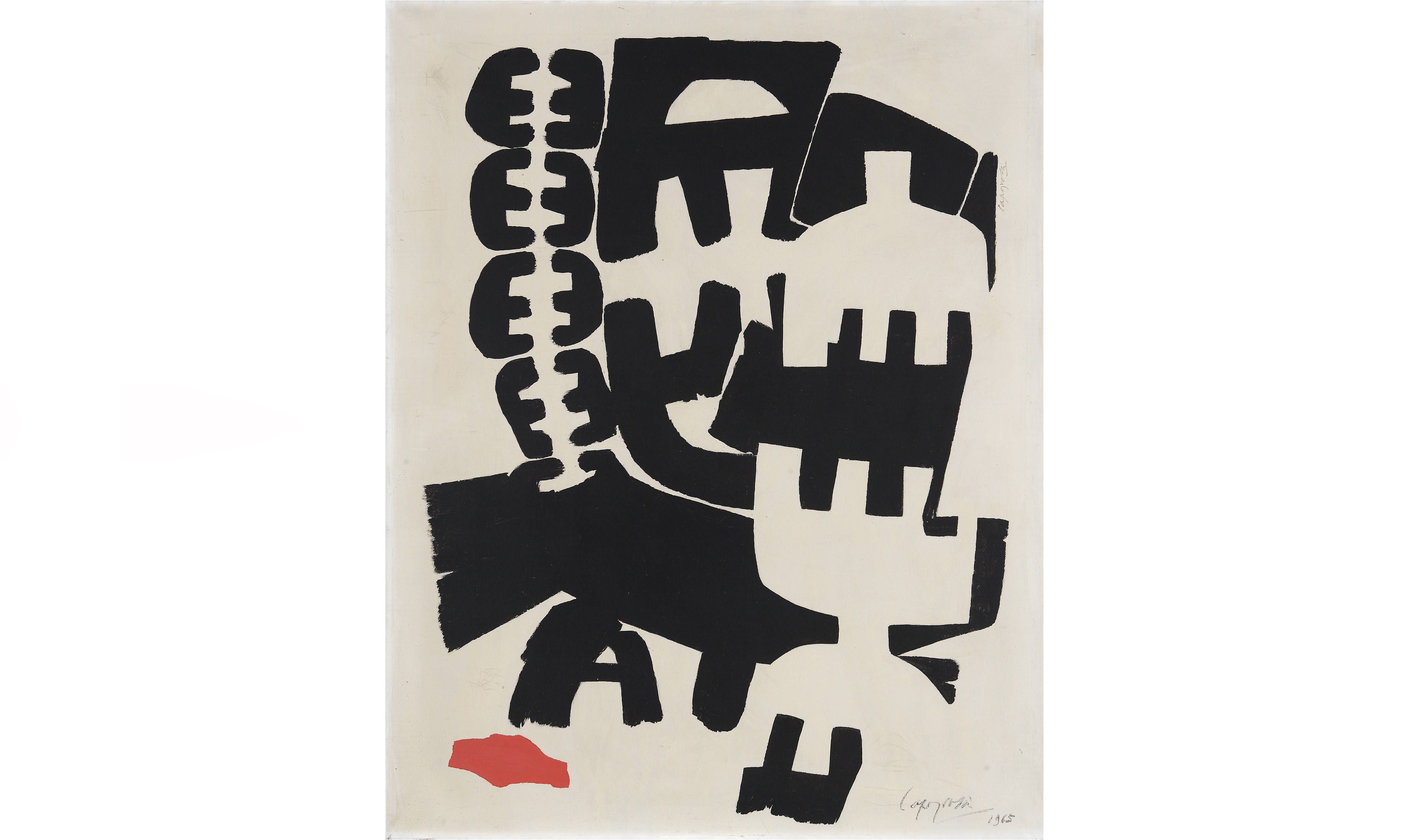 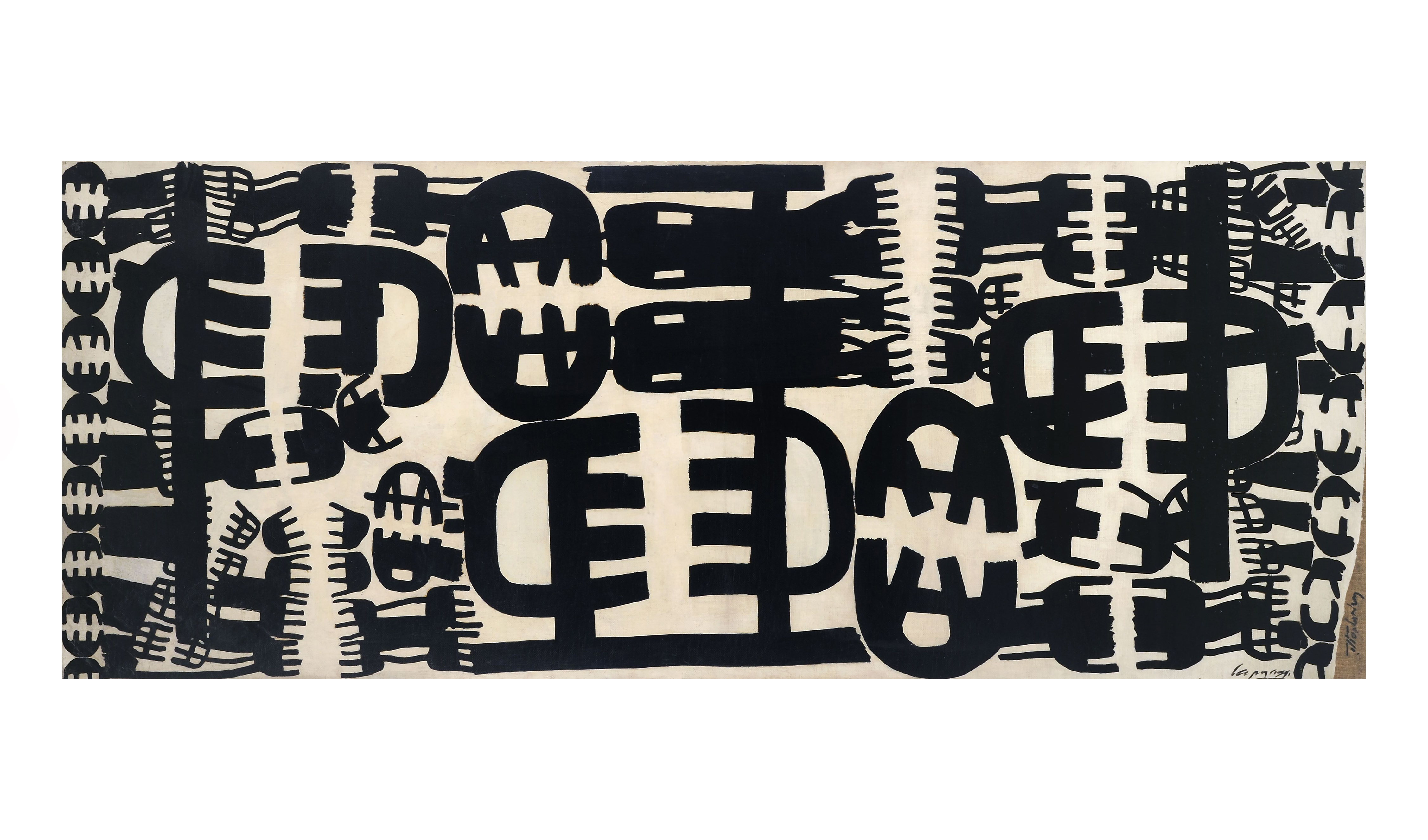 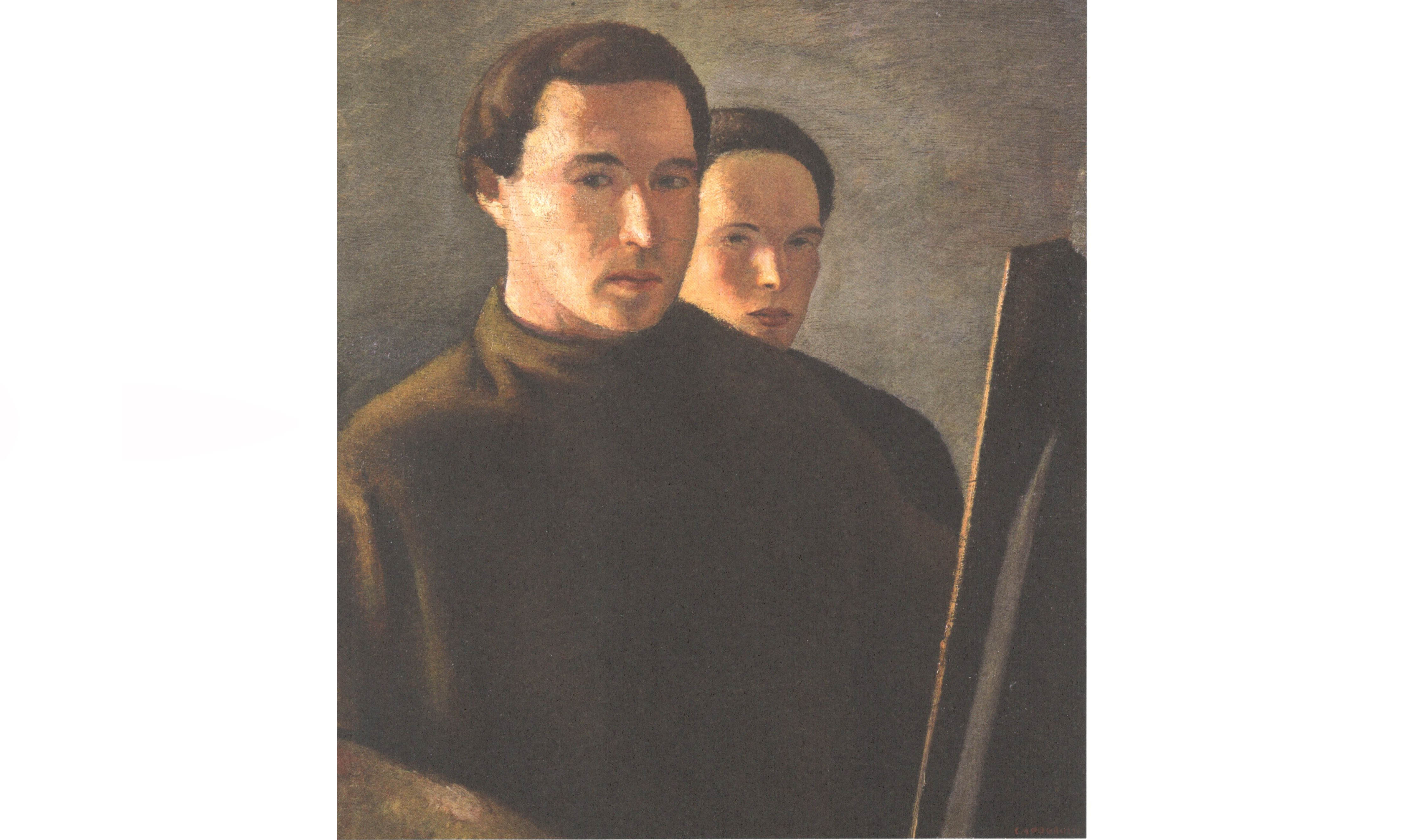 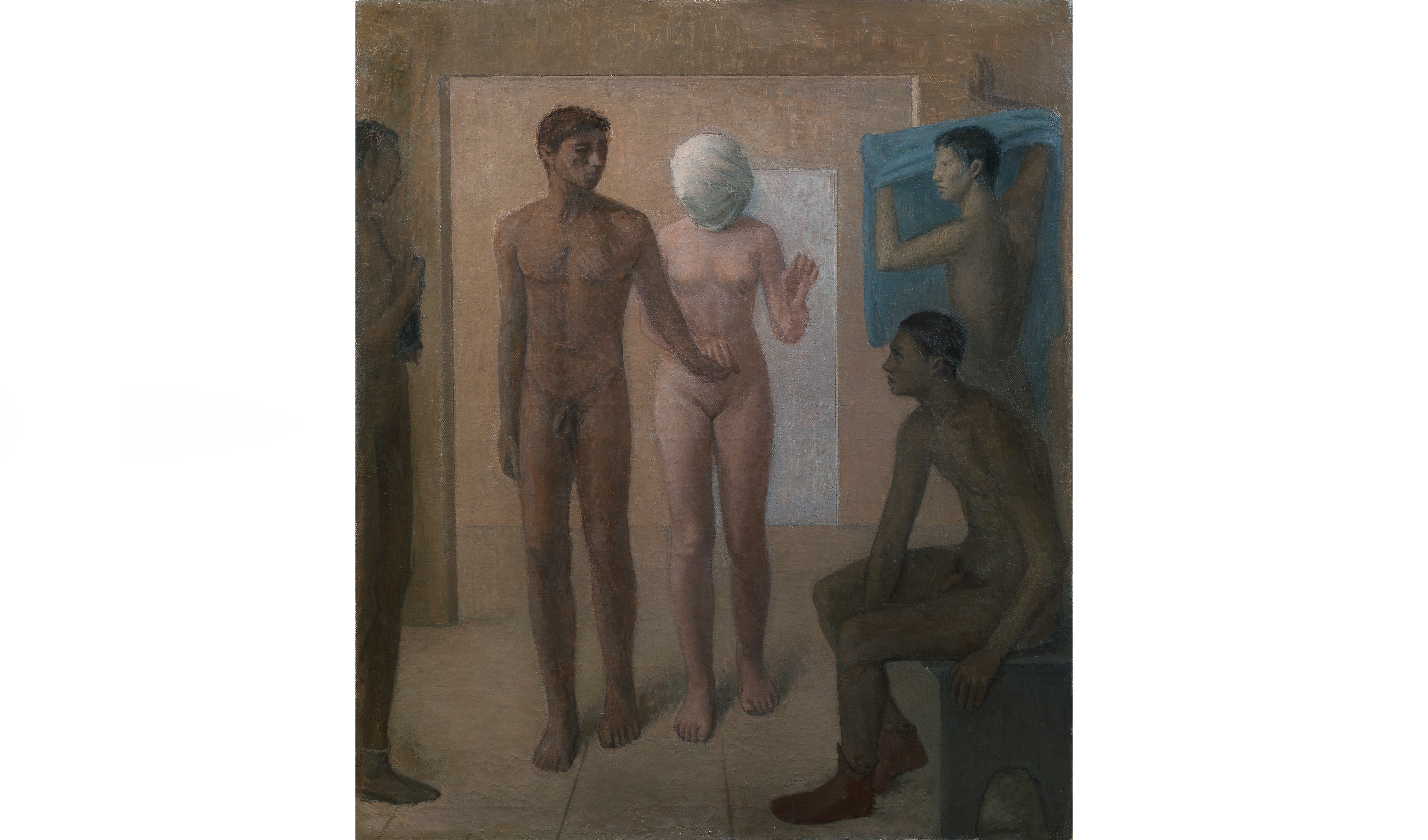 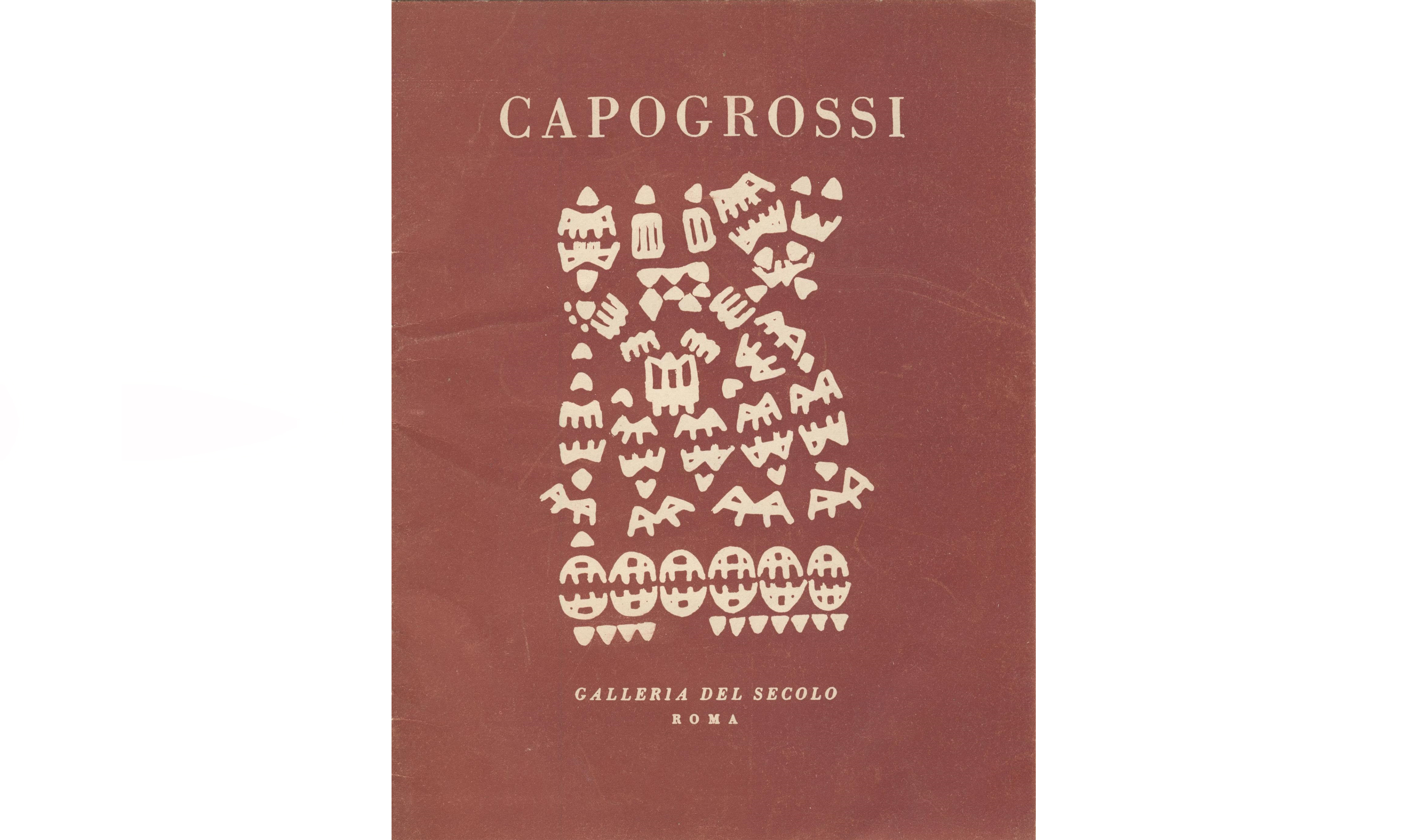 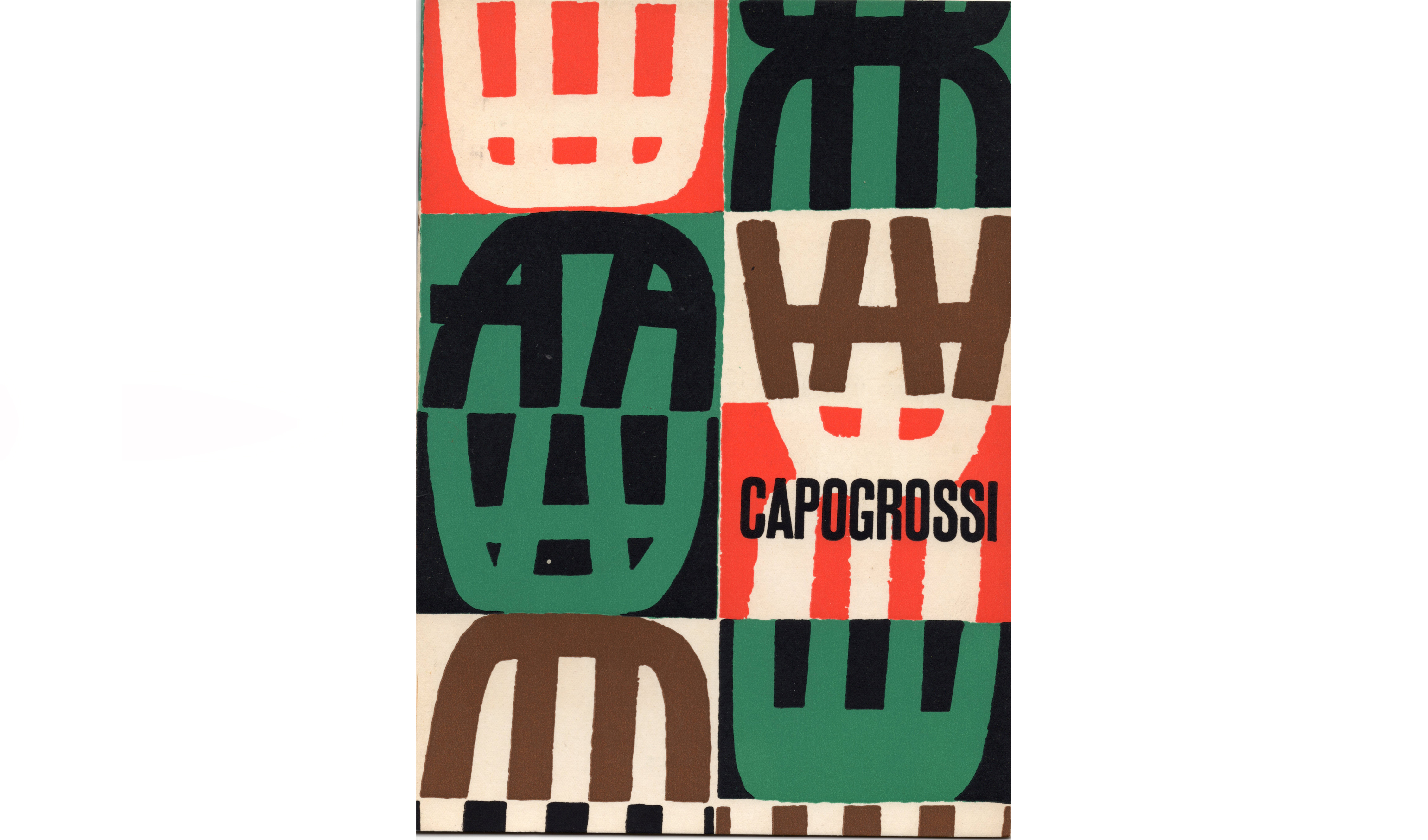 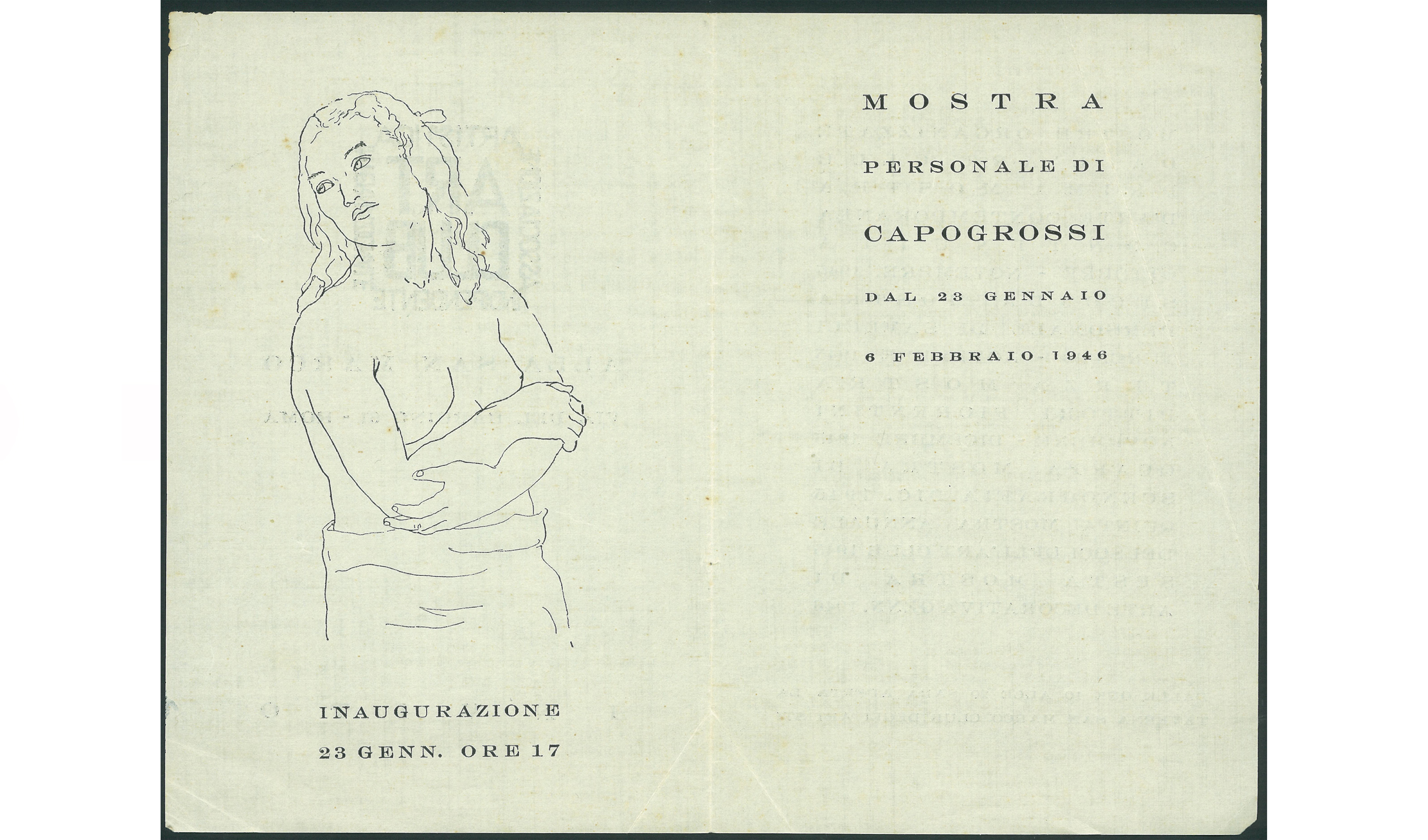 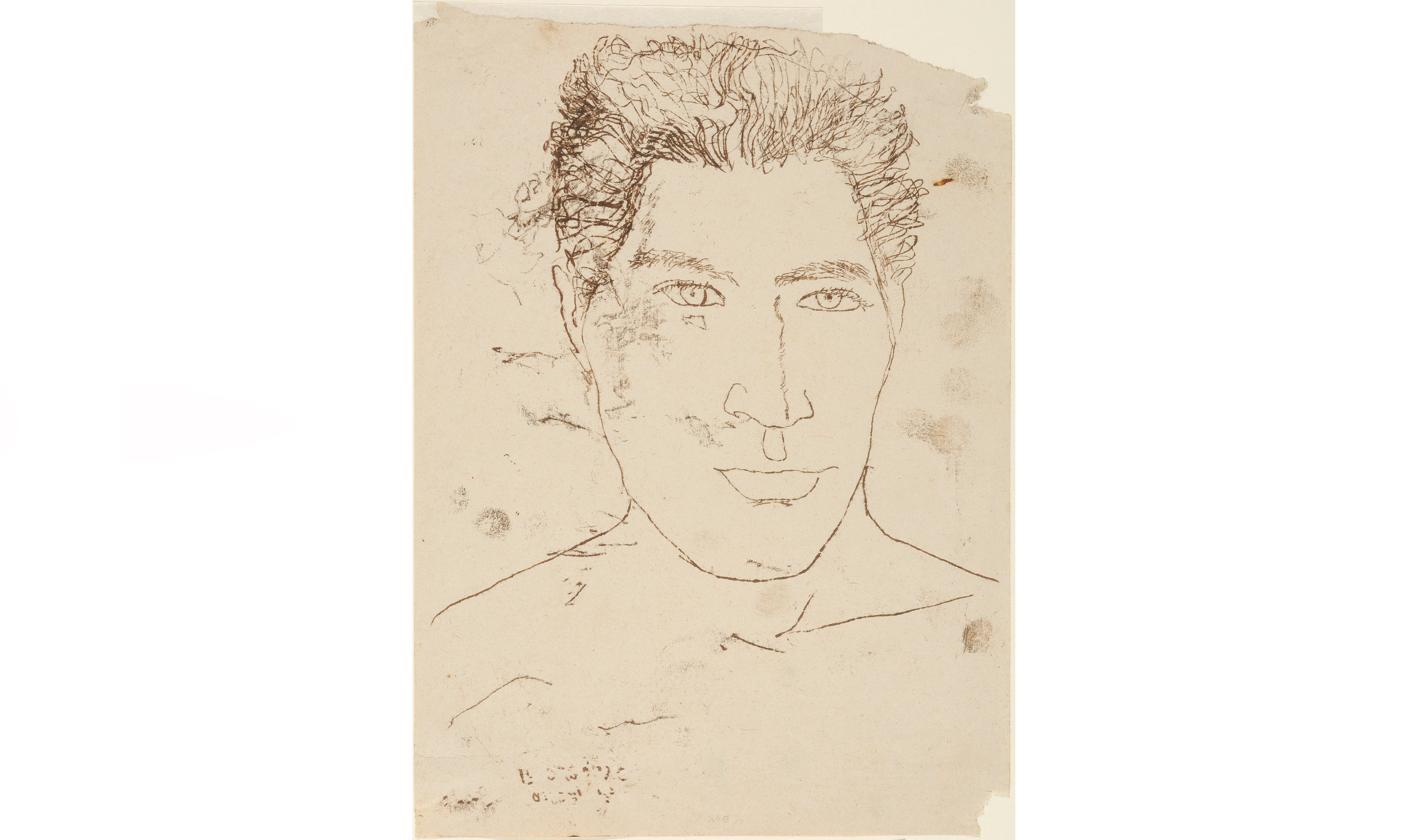 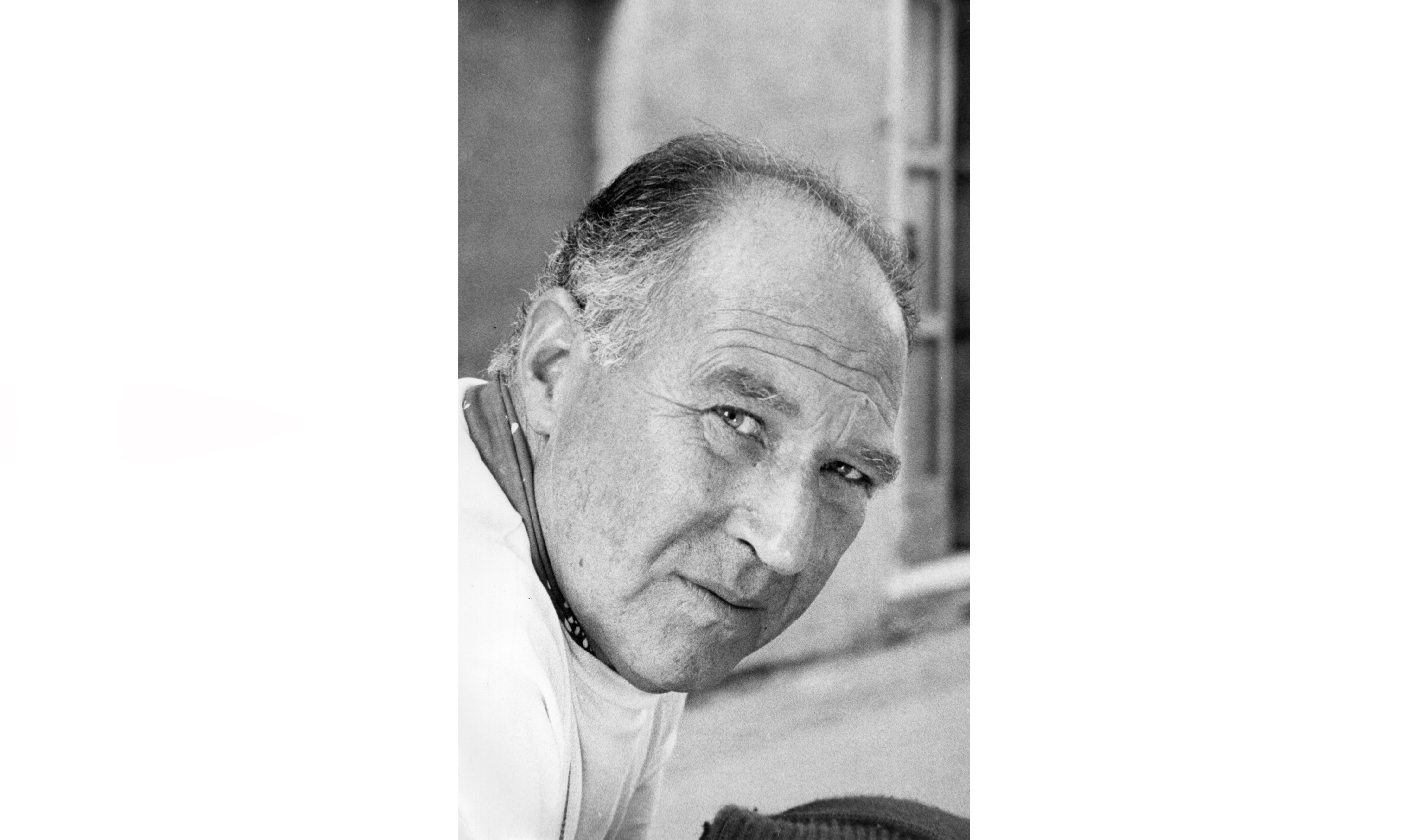 "Art, as indeed its supporter, also has the gift of contributing to history; a history in which each of us is the protagonist, thus leaving a mark of our time, of our today, of our contemporaneity." 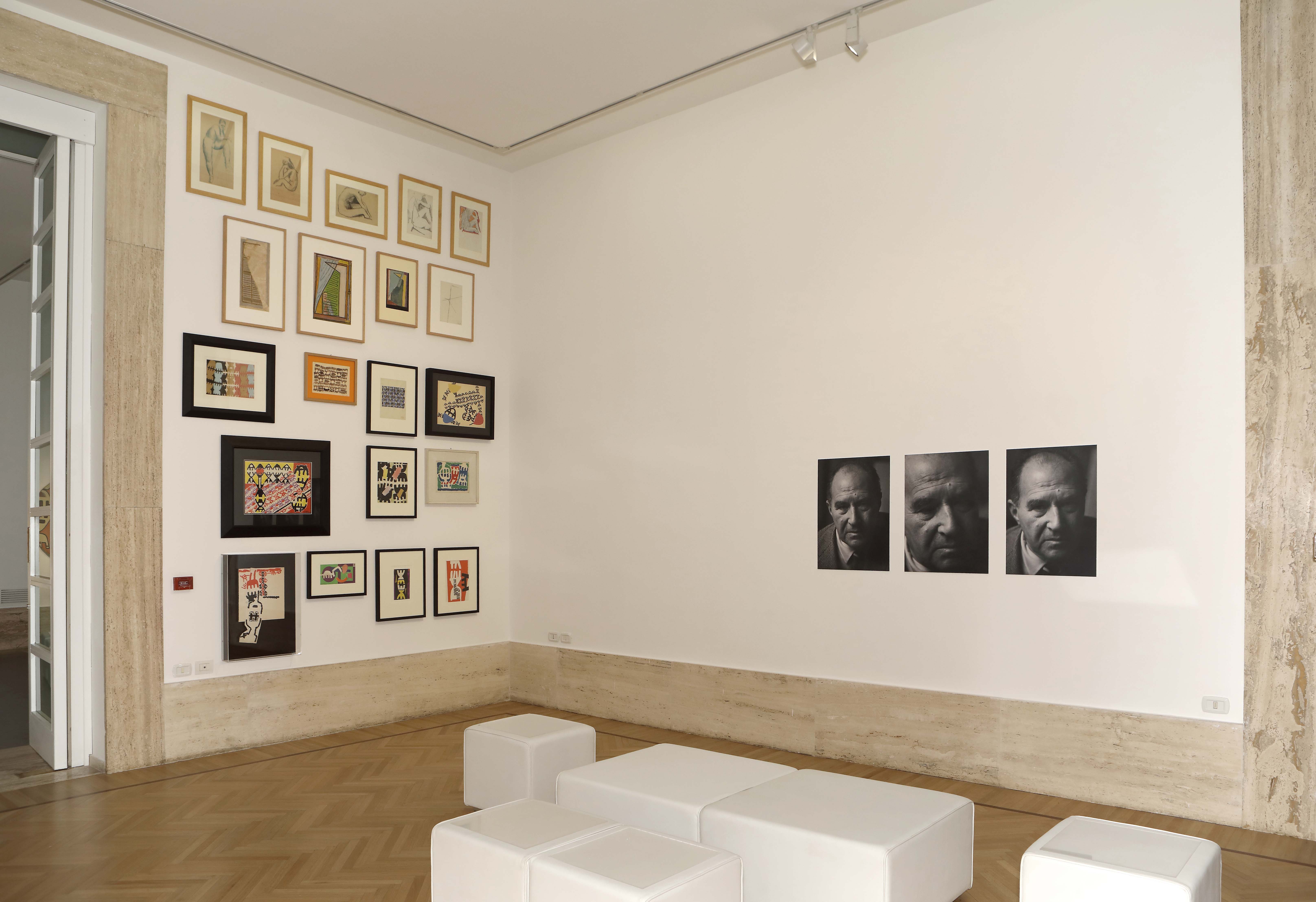 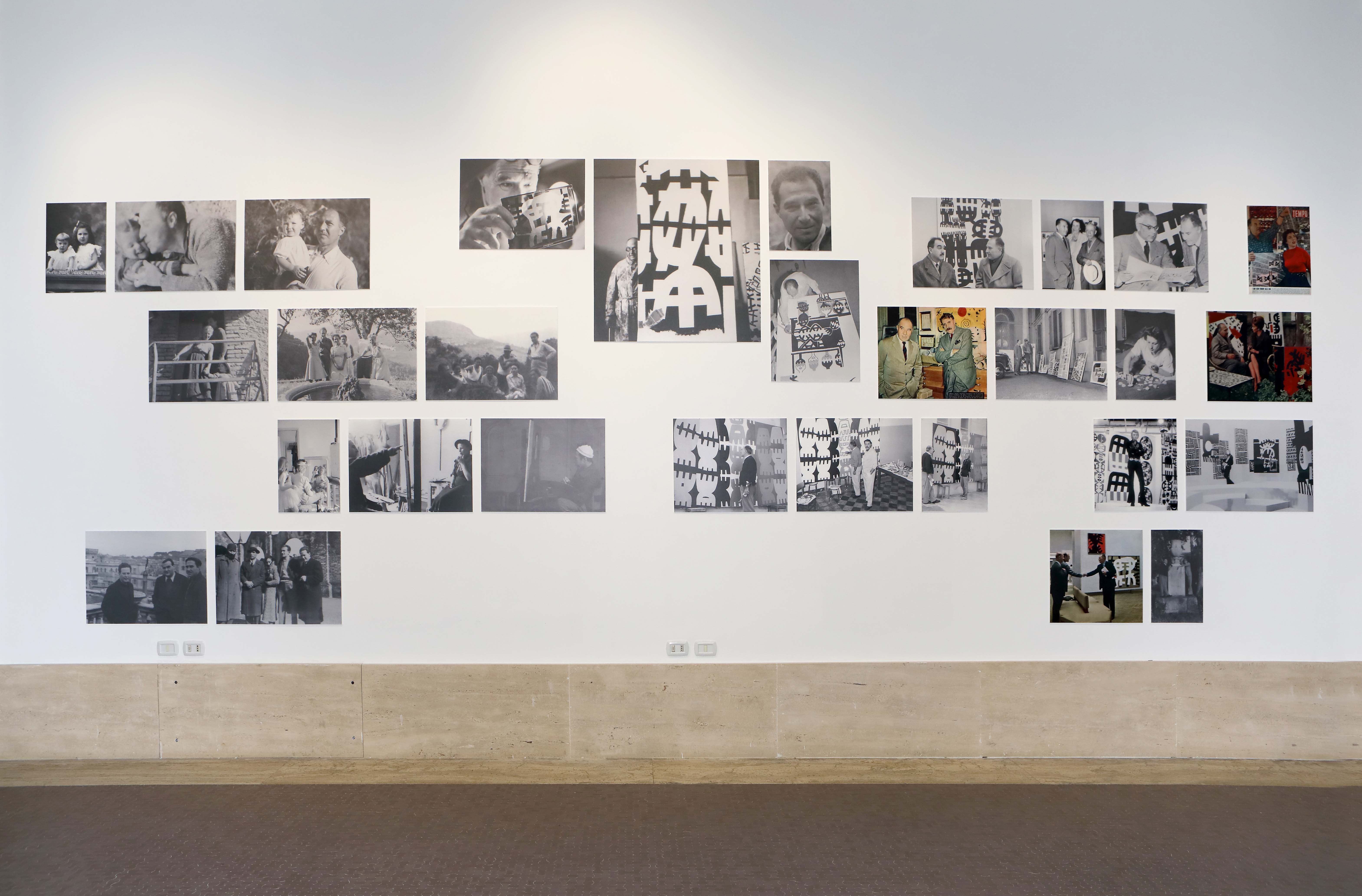 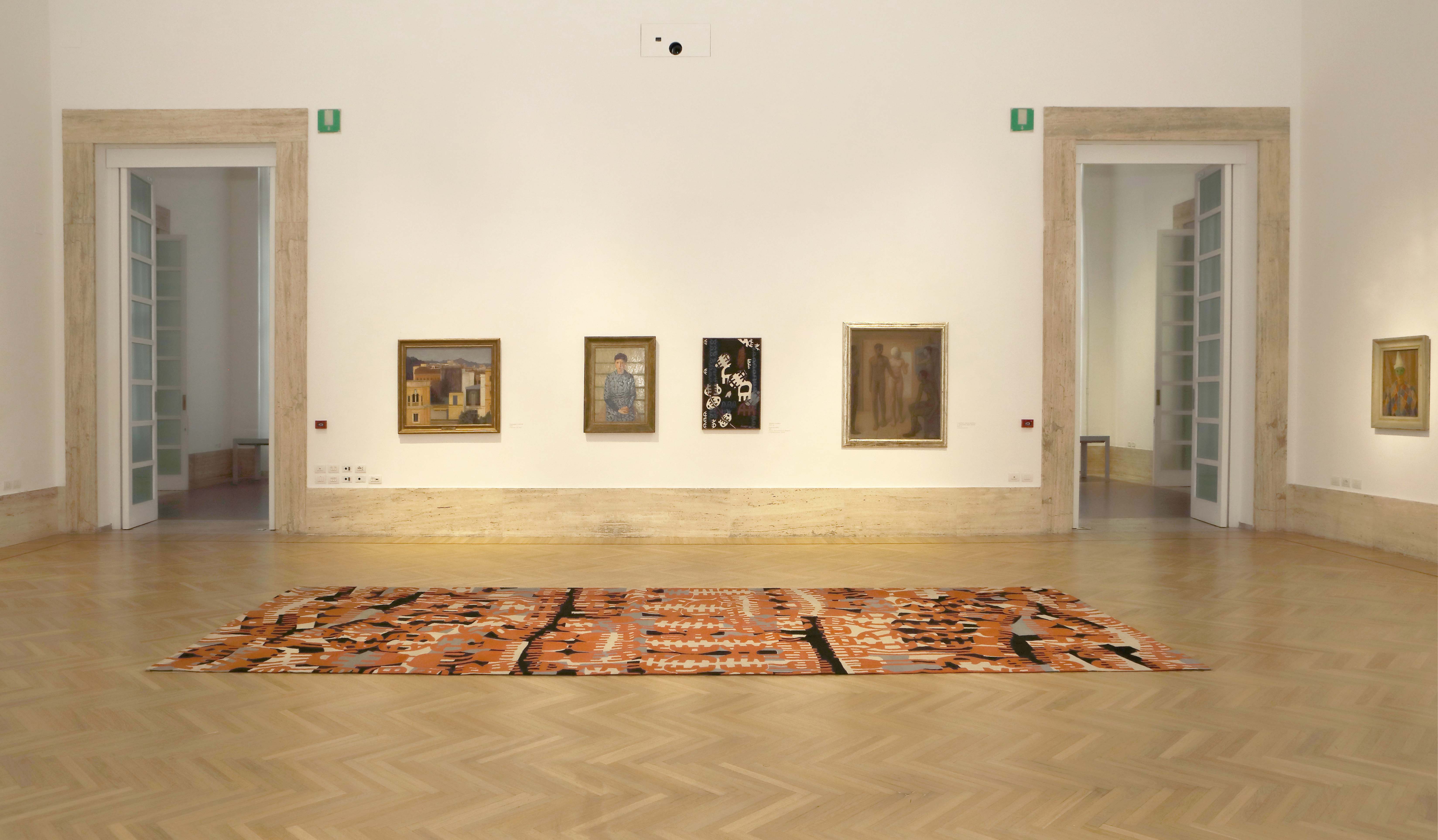 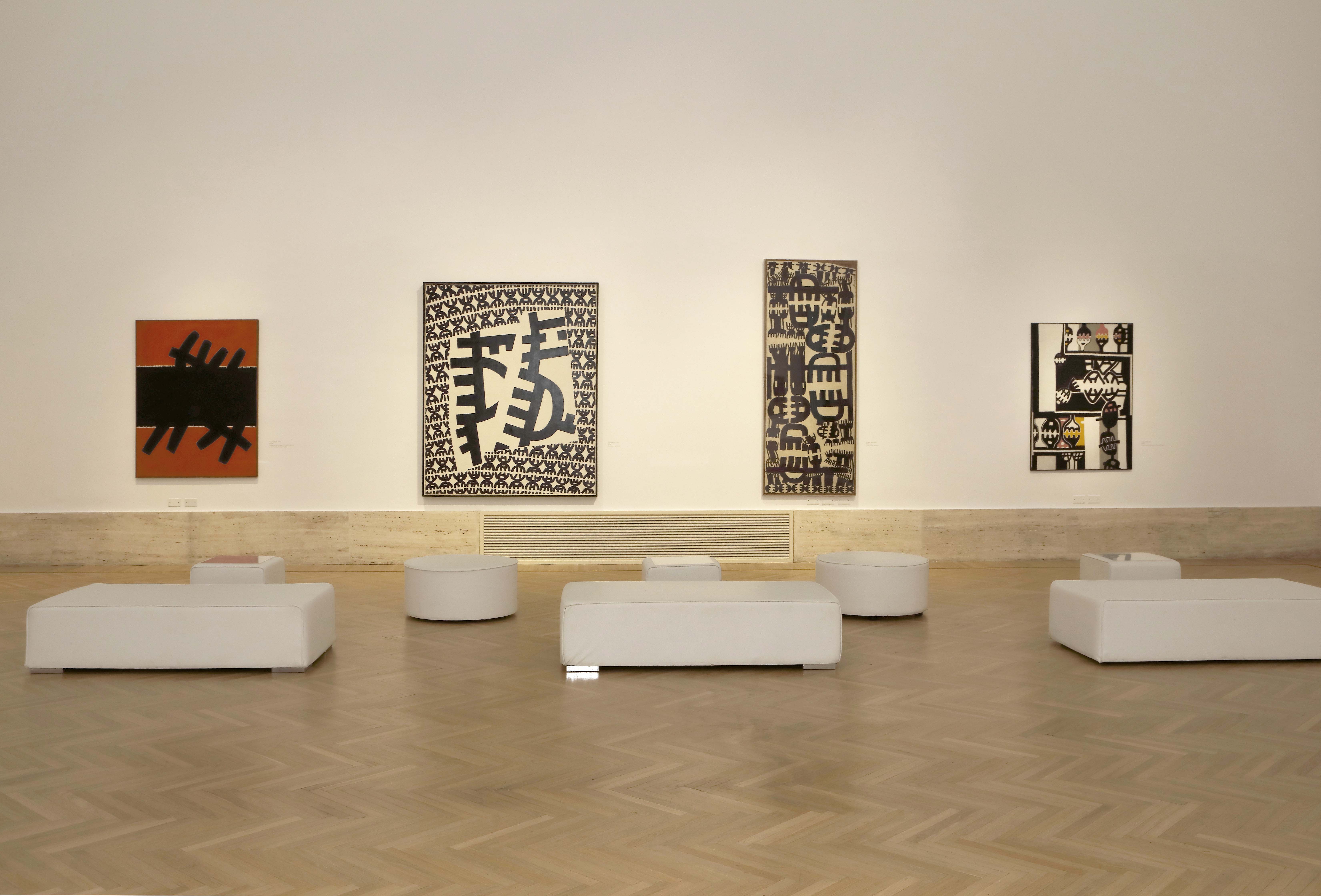 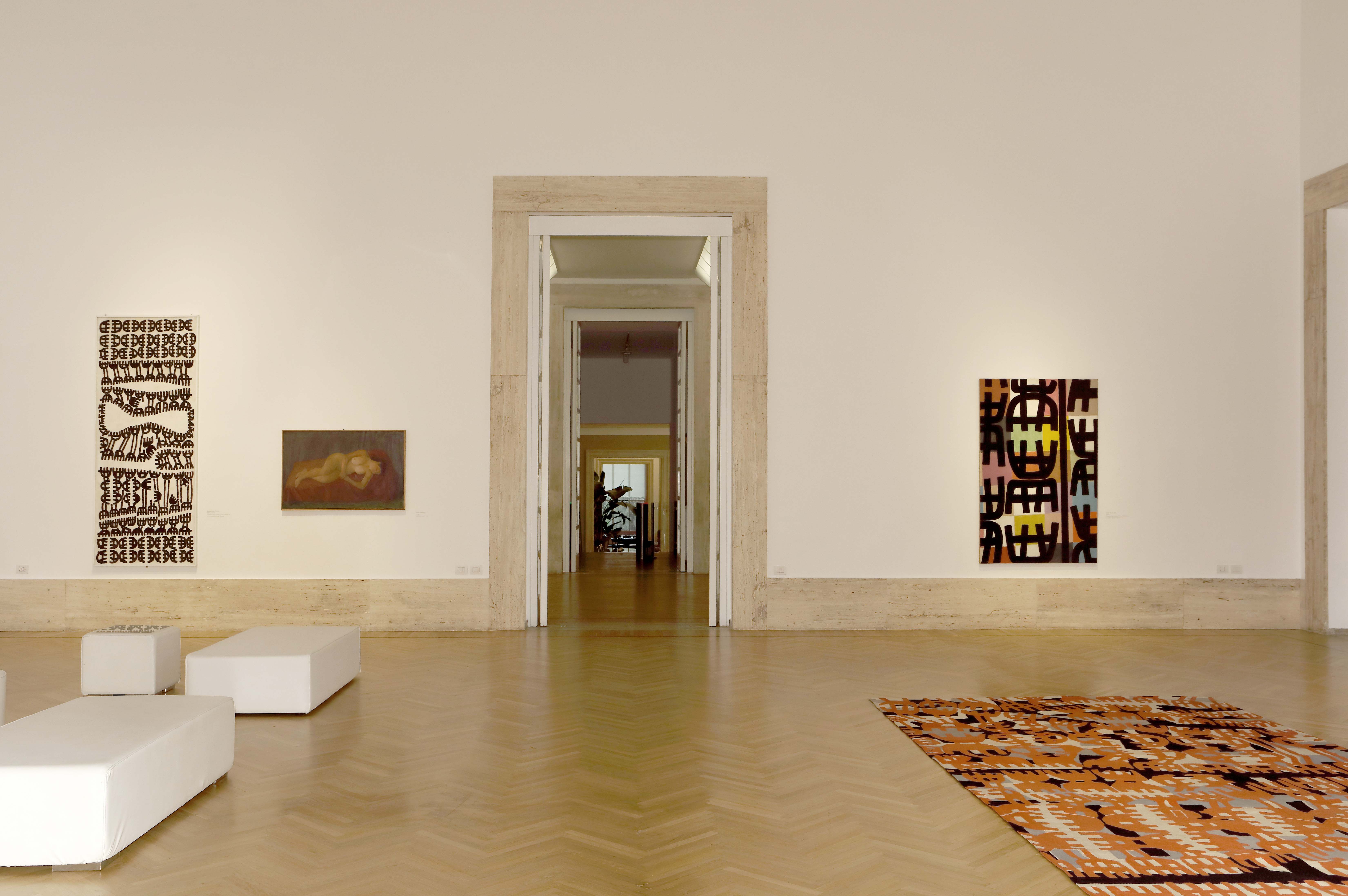